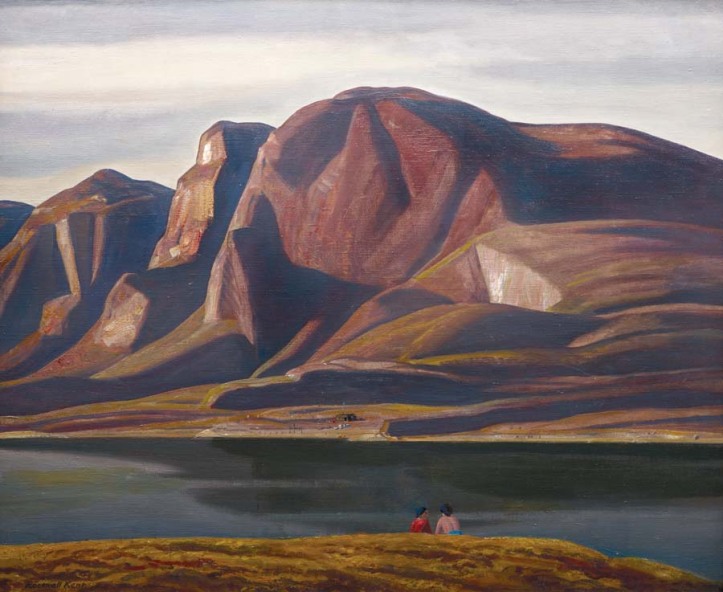 Among the first generation of American Modernist painters, Rockwell Kent’s work was strongly marked by his background as an architect and his plein air training. Through his work, he sought to give a creative response to the natural world that so captivated his imagination.

Greenland (Spring) reflects this desire: monumental renderings of sky, mountains, and sea, reduced to essential forms of light and dark, dwarf the foreground figures. The Arctic wilderness, most notably Greenland, provided the mystical bareness and endless expanses that mesmerized Kent throughout his career.

“In the Greenland paintings style and subject matter mesh completely. From the stark contrasts of light and dark, of pure unmodulated color, the artist creates a monumental, coherent style…Vast still spaces with processions of unbroken horizontals create surreal perspectives in which a man is dwarfed by the majestic face of the Arctic…As we look over his shoulder, this is perhaps how Rockwell Kent wishes us to see him: in and of the landscape, paying homage to Nature the best way he knew how, by painting it.”  (R.V. West, Rockwell Kent: The Early Years, Bowdoin College Museum of Art exhibition catalogue, Brunswick, Maine, 1969. p. 7)

About Greenland Kent said, “In Greenland, one discovers, as though for the first time, what beauty is.  God forgive me that I tried to paint it. ”

Kent studied architecture for three years at Columbia University, but chose to shift his focus to fine art. He studied under William Merritt Chase, from whom he developed an interest in plein air painting. He then enrolled at the New York School of Art where he studied under Robert Henri with classmates, George Bellows and Edward Hopper. Unlike Henri and his classmates, Kent was never drawn to portraiture or still life painting. Instead, he developed his plein air landscape painting through extensive traveling. Of the diverse locations, both domestic and international, it was Greenland that had the most substantial effect on his artistic vision.

He traveled there first in 1929. At the time, he was already one of the most notable American Modernists. Yet, it is his Greenland paintings that matured and honed his style, becoming the most significant works of his career. “In his Greenland paintings, Kent brought to maturity a vision and form of expression singularly sympathetic to the dramatic, stagelike configurations of the arctic.  He captured the intimidating majesty of icebergs and mountains soaring up from a horizontal background of dark seas and crowned by lowering clouds. In many of his paintings, the sense of remoteness and overwhelming power is intensified by the insignificant role of human beings in the composition. On the other hand, his sharing the lives of the natives so completely brought to his perceptions of them a warmth and intimacy…The Greenland ventures brought Rockwell Kent the kind of celebrity that is the dream of every artist.” (R.V. West, An Enkindled Eye: The Paintings of Rockwell Kent, Santa Barbara, California, 1985, p. 11) 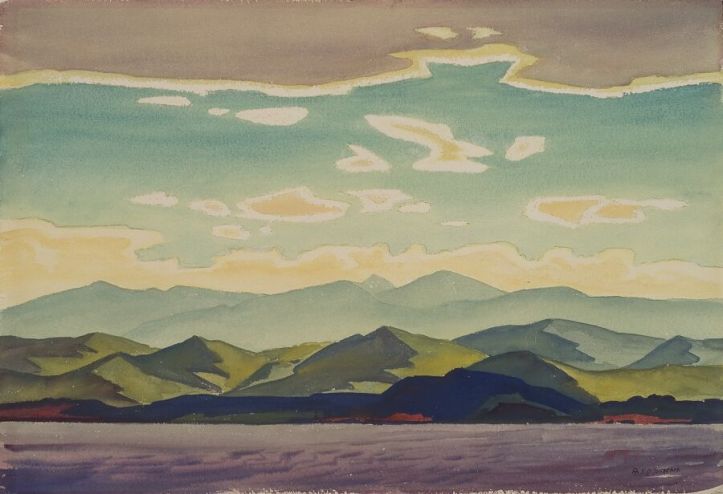 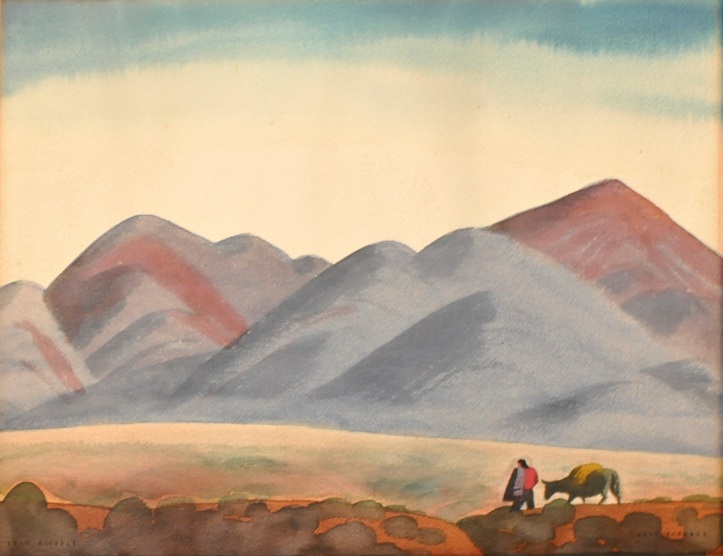 Kent was not the only American Modernist capture the drama of the natural world. In our current exhibition, “Variations on Modernism,” two paintings by Emil Bisttram and Dale Nichols exhibit similar qualities. Bisttram’s Taos Mountain in Spring reflects the grandeur and limitless space of the Southwest. Nichols’ lifelong fascination with Guatemala is reflected in Untitled (Guatemalan Landscape and Figure), in which a massive mountains overwhelm a solitary figure in the foreground. (Read more about Nichols.) A small print by the artist manages to capture this same feeling, this time in a midwestern scene: a small farmhouse in the lower middle, is overshadowed by a large, rolling hill. An expansive night sky dominates the scene, enveloping the man-made structures. 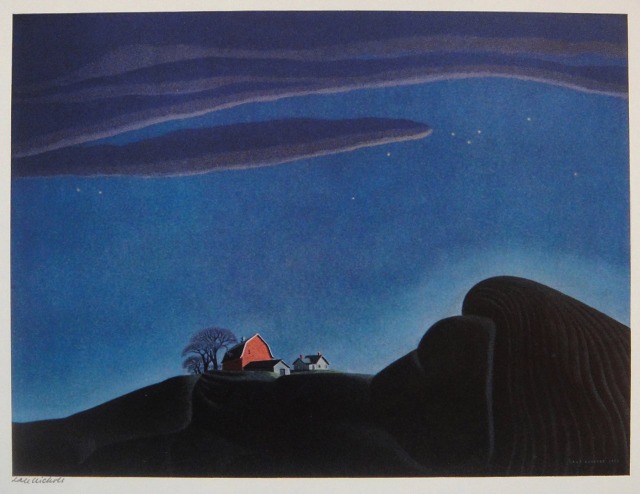 Not all the works in “Variations on Modernism” are landscapes. Artists Howard Cook, Marino Marini, Ben Shahn, Louis Ribak, and Joan Miro are represented,  and each has his own take on Modernism. The show is on display January 30 – February 17.

Stay tuned for upcoming events in 2021!

We’ve decided to switch things up a bit for May First Friday! Stop by Friday 5-8pm. Doors open at 10am, cash bar 5-8. Don’t worry, the artwork will be on the wall by then 😉
We’re booked for 2021! We even have very exciting shows planned for 2022-2023. Mark your calendars and save the date for all of our upcoming solo exhibitions featuring original paintings, ceramic sculpture, digital drawings and NFTs!
We’re excited to host you this Friday for our May First Friday downtown 5-8pm! Cash bar and brand new works available for viewing on our first and second floors. Please stop by & support the arts!
Brand new painting by Jenny Kruger, 'Strut' india ink on birch panel, 18 x 18 inches, $2,400. Those feathers!
Happy Husker Spring Game! We are here until 5pm today. It is so great seeing people downtown again. We currently have this five piece Nebraska Suite available by Leroy Neiman. Stop in and say hello!
Visitors always comment how they thought Ernest Ochsners paintings are photographs because of his realist technique. His paint has such movement it almost feels like you can hear the wind through the trees and grasses. Swipe for the full painting, “Lincoln Creek.”